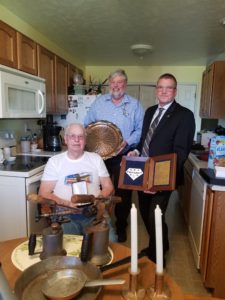 METAMORA, Ill. – Lee Neff and his brothers had been shoveling 5 tons of coal on a summer day in 1943. Back in those days the coal was dumped in the street, and then had to be shoveled into the building by hand. Lee was 16, and at the end of the day he was asked if he had a job. He said that he did not, but he was looking for one. That was the beginning of a 75-year journey that continues to this day.

One of nine children, Lee grew up during the Great Depression. He was born on Van Buren Street in Peoria, and even though he is 92 years old he can describe the city in vivid detail. He went to work at Peoria Copper Works in June of 1943. He was on probation for about 4 months, and then on October 1, 1943 he became a member of Sheet Metal Workers’ Local 1. His sheet metal career was not really with sheet metal. Lee was a coppersmith, and his career centered around the distilling industry. Before Lee had an opportunity to get very far in his new career, Uncle Sam needed him to fight for his country in the United States Navy.

World War II was in full gear and the war effort took precedent over everything else. While the Sheet Metal Workers’ paused Lee’s apprenticeship, he was assigned to an LST in the Pacific. Lee was present at Iwo Jima, where he witnessed the flag raising, and later he was a part of the assault on Okinawa. With the victory over the Nazi’s and Japan made possible by the sacrifices of veterans like Lee, it was time to come home and participate in the post-war economic boom.

When Lee came home he returned to the copper shop where he worked for the better part of 30 years. Shortly after his return from the Navy, he decided that he would take an interest in a girl that he had known before the war. They married in 1947, and together they raised 2 boys in West Peoria. Lee’s work at the copper shop allowed him to work in some historic Peoria area landmarks. Hiram Walker’s, Fleischmann’s, Standard Brands, and American Distillery were just some of the places he performed his craft.

Lee was not an idle member of his union, he not only participated in meetings he was an officer for 27 years. In all that time he told me that no one ran against him in an election. Lee was also instrumental in starting a pension plan for the members of Local 1. That was not an easy task, and it made some of the guys give him hell. That same plan that he helped start all those years ago has been sending a check to his mailbox once a month for the last 30 years. 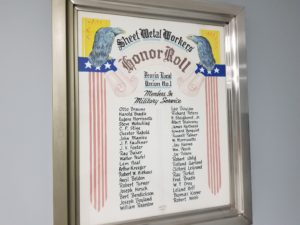 Lee retired in 1988 after 45 years as an active member. Once retired he and his wife Wanda spent a great many of their winters in Arizona. As the years went by they began to stay closer to home. You may have seen them on commercials for Snyder Village in Metamora riding their bicycles. Wanda passed away not long ago, and that has been rough. They were married just short of 71 years. They had been close since they were kids in the neighborhood, and it is not the same for Lee without her here.

Lee Neff is a central Illinois hero in so many ways, Husband, Father, Veteran, union member, and craftsman. It is with great honor that the International Association of Sheet Metal, Air, Rail, and Transportation Workers celebrates his 75 years with Local 1. We as union people should strive to be like Lee Neff, never asking what is the union doing for me, but what can I do for my union.