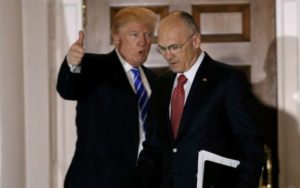 Donald Trump’s pick as Labor Secretary telegraphs his plan to use the Executive Branch of the government to declare war on the rights and progress of US workers.

STATEMENT: Saru Jayaraman from ROC United, a leading voice for the nation’s 10 million+ restaurant workers, issued the following statement on Andrew Puzder for Secretary of Labor:

“Andrew Puzder is a completely unacceptable choice for United States Secretary of Labor. An avowed enemy of restaurant industry reforms, his past is riddled with class action wage theft lawsuits, sexist remarks, and falsehoods that paint wage increases as ‘job-killers,’ minimum wage earners as entitled teenagers, and his own employees as lazy welfare recipients. His nomination threatens the incredible gains we have made over the past eight years, especially as momentum grows for eliminating the subminimum wage and establishing One Fair Wage for all workers. Contrary to what Puzder and his associates at the National Restaurant Association would have you believe, restaurant workers are largely women and people of color, making as little as $2.13 per hour, and thus relying on tips to survive. As a result, they face disproportionately high rates of poverty, discrimination, and sexual harassment. Workers deserve a Secretary of Labor that believes, as Dr. King once said, that all labor has dignity. On behalf of the nation’s 12 million hard-working restaurant workers, the Restaurant Opportunities Centers United opposes the nomination of Andy Puzder as Secretary of Labor.”

In The Workplace
sharon
Comments are closed