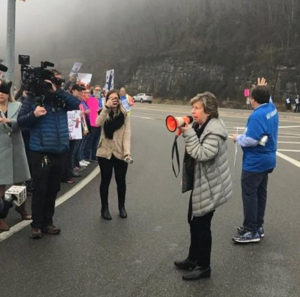 CHARLESTON, W. Va. (PAI)—No raises for 10 years, coupled with state-imposed increases in health care costs, forced West Virginia’s teachers and school staffers – from both the American Federation of Teachers and the National Education Association – into a statewide strike on Feb. 22-23, and possibly longer.

The forced strike closed every school in the Mountaineer State, for the first time since 1990. Then, it wasn’t unanimous. This time, it was. A map of West Virginia, county by county, used to indicate school closures on the web, was entirely red, standing for shut.

And while GOP Gov. Jim Justice, a former Democrat, signed a bill on Feb. 22 to give the teachers a 2 percent raise next year and 1 percent in each of the following two years, it wasn’t enough to prevent 4,500 upset teachers from marching into the state capitol building in Charleston to confront the GOP-majority legislature.

That’s because the coming pay hike follows prior hikes in health care premiums and cuts in benefits, even though a state board voted on Feb. 22 to freeze both.

The Republican reaction was to claim other programs need money, too. One GOP state senator told a crowd of teachers the demands came from “union bosses” – prompting one teacher to retort her father was a retired and ill 42-year Mine Worker. And State Majority Leader Rich Carmichael, R-Jackson, said of the union leaders that “all they want is to strike.”

One so-called boss, AFT’s Randi Weingarten, spent much of a rainy and cold Feb. 22 on the picket line at Riverside High School in the Charleston suburbs. She went down the line, hugging and thanking each teacher, then grabbed a bullhorn to lead them in a chant “Enough is enough!”

“I’m reporting for duty on the picket line,” she told the picketers. “West Virginia’s teachers and school service personnel are fighting for basic dignity for themselves and their students. They want to be in their classrooms, not at the Capitol, but they are frustrated and disillusioned with a state government that allowed their pay to decline and their teaching conditions, and their students’ learning conditions, to deteriorate.”

“The last straw was the huge increase in health insurance premiums imposed by the state in November 2017,” she said, adding some teachers “had to take two or three jobs to make ends meet,” while others fled to neighboring states.

“These educators don’t want the governor and legislature to give them hollow promises or Band-Aid solutions.  They want clear and binding commitments so teachers don’t need second jobs to feed their own families. If the money is there for tax cuts for the wealthy and corporations, then funding should be there for West Virginia’s future.”

employees have been eroded, while their premiums have increased and their take-home pay has gone down. West Virginia is now 48th out of 50 states in average teacher salaries, with every neighboring state paying far more to attract and retain teachers. No wonder there are huge shortages here.”

“There’s so many things that our members and our teachers and service personnel are upset about,” Wendy Peters, an elementary school teacher in Raleigh County and president of its NEA local.

Besides the lack of pay, the GOP-dominated legislature is considering a so-called “paycheck protection” bill to throw unionists out of politics, taxpayer-paid vouchers for parents of private school kids and “possible changes to educator seniority,” she told local media.  All three are favorite radical right anti-union causes. ###

In Action
sharon
Comments are closed