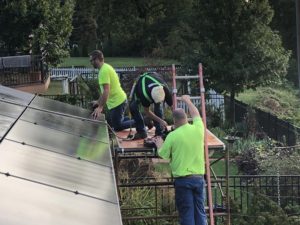 PEORIA, Ill. – With the passage of the Future Energy Jobs Act (FEJA), solar energy has become affordable and is attainable for anyone wanting to bring solar to their home.

The technology of solar has come so far, according to the group Go Solar. “The advancement of technology in the past couple of decades has made some hesitant,” says Scott Cramer, CEO of go Solar Group. “Homeowners can now get solar that once only well-funded government projects had.”

Locally, signatory contractor Ruyle Mechanical has been one of the first to delve into the market. “Senator (Dave) Koehler was instrumental in passage of FEJA which brought a new Solar Renewable Energy Credit incentive program to the state,” says Kiersten Sheets, with Ruyle Mechanical. “To further support his belief in the future of renewable energy in Illinois, Senator Koehler contacted Jason Hawksworth of Hawk Energy Solutions to begin a plan to install a solar PV array on the roof of a new carport built earlier this year at the Koehler residence.” The installation began the first of October.

“We decided to install solar and use the same companies our church used,” says Senator Koehler. “I had two requirements, one, I wanted it all-union installed and two, I wanted USA made solar premium high efficiency panels.”

The cost used to be out of the range of most families. However with the passage of FEJA, most families could see a payback fairly quickly. “You get a federal tax credit of 30 percent and get the state renewable credits and that is going to take care of 70-80 percent of the bill. The payback of the entire system is five to six years and the panels are guaranteed for 25 years,” says Senator Koehler. “This is all because of the Future Energy Jobs Act.

“What we have seen is an explosion of interest in solar,” Koehler continues. “Whether it is commercial, community or residential, the time is now to do it. You are either using the electricity or it goes back on the grid and your meter goes backwards. We will generate enough to cover 70 percent.”

“Today it is producing twice as much as they are consuming,” says Hawksworth while monitoring the new system at the Koehler household. “There is a phone app to monitor consumption and it helps him understand how he is using power, this is a state of the art monitoring system.”