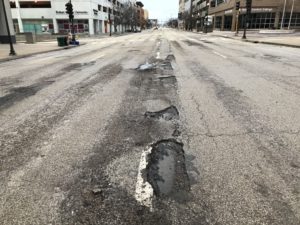 WASHINGTON, D.C. – Infrastructure. The lifeblood of a successful country. Roads, rails, bridges, airports, schools, clean drinking water, sewer systems, the Internet, etc., all provide the physical connection of a culture. And the means to move product and deliver services.

The building boom of the United States built the boast of the best among the world’s infrastructure. The bulk of the existing systems within the United States can be attributed to the developed skills of the union members of the Building Trades. The apprenticeship programs in use for 100+ years generate highly skilled people which provides taxpayers the best value possible when building public infrastructure.

As an example, thanks to the union Plumbers, at the turn of the 20th Century the people living in the fast-growing urban and metropolitan areas enjoyed clean, fresh drinking water and effective wasterwater and sewer systems, which eliminated formerly widespread disease. As the 1900s unfolded the skilled members of the union Building Trades across the country installed and maintained water and wastewater systems, and all other utilities, e.g. electricity, phone lines, etc. These advancements built the modern, industrial-based life of the United States even for those in remote rural areas.

President Eisenhower had initiated the construction of the Interstate system which has transformed the country and culture. Goods, e.g., fresh produce, and even services, e.g., migrant farm workers, now move across the country quickly and efficiently. The advances in computer technology and development by the U.S. military of effective, fast communication generated the Internet, which now allows information to move across the world at lightening fast speeds.

President Trump had campaigned on a promise of spending a “trillion dollars” or more on the country’s crumbling roads, bridges, etc. On February 12 he introduced a 53-page, 10-year plan to improve the country’s infrastructure. During the campaign Trump had promised in an August 2016 appearance on the Fox Business Network that his administration would address infrastructure spending by offering much more than candidate Hillary Clinton. “I would say at least double her numbers, and you’re going to really need a lot more than that.”

Example. The federal government spends $400 – 500 billion annually on infrastructure maintenance and development. Clinton early in her campaign had proposed spending $275 billion in additional funds, which generates a total of $675 – 775 billion.

Trump claims his plan is a $1.5 trillion investment. A bit misleading as the Trump proposal spends only $200 billion in federal dollars. Note. Trump’s plan does not add to existing funding. A report issued by the Center For American Progress states “The Trump budget cuts $281 billion from traditional infrastructure programs over 10 years.” (www.americanprogress.org)

Trump claims that ‘seed money’ will generate an additional $1.3 trillion in public/private investment. As with all things private, profit must be factored in to the economic equation. The article will examine examples of how private investment, i.e., both “congestion pricing,” and toll roads, have impacted American drivers.

The breakdown of ‘numbers’ in the Trump $200 billion infrastructure proposal includes: $100 billion in incentives to local government with $20 billion earmarked for projects of “national significance,” that can, “lift the American spirit,” and cites the Hudson River tunnel into Manhattan as an example; $50 billion for rural block grants based on a formula which includes the miles of rural roads and the rural population, and the funds can be spent on transportation, broadband Internet access, water, or wastewater systems, or power systems; with $30 billion left for infrastructure-related projects and loans.

This financial burden of non-federal financing comes at the same time as Congress passed and Trump signed a new tax law which limits the deduction for state taxes. So states with pressing needs to fix, improve and modernize infrastructure will be faced with raising taxes on residents who will not get to deduct the cost. Ouch.

Note. Plus, the Trump plan takes back funding from other sources, e.g. the Amtrak grants will be cut in half, and the Army Corps of Engineers budget cut by 20 percent. The Trump proposal also calls for the elimination of TIGER grants. Thanks to U.S. Senator Dick Durban (D), the federal government awarded Peoria funds from the program for improvements to the streets and sidewalks in the Warehouse District.

A member of the committee, U.S. Representative Scott Perry (R-PA), had raised the issue of increasing the financial threshold for Davis-Bacon. Rep. Perry had asked Chao if the Trump administration’s position was “no changes at all?” and she had replied “I’m interested in getting the infrastructure bill passed.”

Anti-union groups claim Davis-Bacon excludes African-Americans from construction jobs. U.S. Representative Cedric Richmond (D-LA), chairman of the Congressional Black Caucus commented, “If [Trump’s Infrastructure bill] targets unions or leaves Americans worse off I will fight it every step of the way. And if it doesn’t include prevailing wages and protect Davis-Bacon, it’s a non-starter, at least for me.”

The National Association of Building Trades Unions (NABTU), AFL-CIO, issued a statement February 13, following the release of the Trump proposal. “American infrastructure is in dire need, and President Trump’s initiative in recognizing this challenge should be acknowledged. NABTU looks forward to a constructive debate on this critical issue and working with the administration and Congress on a bi-partisan basis to ensure the passage of a broad, robust and responsible infrastructure package that addresses our nation’s present infrastructure challenges and that will lay the foundation for a long-term economic prosperity for Americans in communities large and small.”

Pay attention as the inclusion of Davis-Bacon protection will play a prominent part in whether or not the NABTU supports any final infrastructure bill.

The WorldBank.org issued a report of infrastructure needs worldwide extending to 2040. The United States is forecast to have the largest investment gap, i.e. difference between the needs and the current trends in investment, with the largest shortfall in roads and electricity.

The Trump proposal also calls for only one federal agency to handle all environmental issues and reports. Plus, it seeks a firm deadline of only two years to get a construction permit. (Twenty one months for environmental review and then three months for the state where the project is located to decide to go ahead.) Note. According to the Department of Transportation the current median time for a construction permit is three and a half years.

During his State of the Union address, Trump revealed his intent when he talked of, “Tapping into private sector investment to permanently fix the infrastructure deficit.”

Trump’s infrastructure plan calls for the government to “authorize federal divestiture of assets that would be better managed by state, local, or private entities.” Among the assets listed for possible ‘privatization,’ both the Ronald Reagan and Dulles Airport (both of which receive no federal dollars), the Tennessee Valley Authority, the Washington Aqueduct (supplies fresh drinking water to D.C.), and others.

Trump claims the sale of infrastructure makes business sense, “Federal ownership of these assets can result in sub-optimal investment decisions and create risk for taxpayers.”

The Trump proposal also calls for states to consider collecting tolls on Interstates within their borders. The Alliance For Toll Free Interstates issued a statement in response to the proposal for tolls, “This plan is not innovative or good policy, it is simply a plan for #TrumpTolls.”

Let’s look at a few examples of how a private entity now operates infrastructure.

Congestion pricing. Here’s how it works. A 10-mile stretch of I-66 which connects northern Virginia to Washington, D.C. now charges a toll based on traffic patterns. High tech sensors monitor traffic. When congestion begins to slow traffic the toll price increases until it hits a price which pushes motorists to exit. Supporters of such programs state the resumption of ‘normal’ speed in theory both saves fuel waste, and lowers air pollution. Unless of course you are stuck in the now super slow surface highways and streets.

Note. The day it debuted, December 4, 2017, the toll on I-66 hit $34.50, the next day hit $40, and recently hit $44. The Federal Highway Administration says this type of toll pricing allows “the power of the market to reduce the waste associated with traffic congestion.” Or as the realists label them, ‘Lexus Lanes.’

By the way, as the program expands an Australian company, Transurban owns 77.5 percent of a similar arrangement (the Express Lanes Project on I-95) and also owns 94 percent of the I-495 Express Lanes around the Beltway in Washington, D.C.

Toll roads. Interstate 69 runs a 156.28 miles stretch of east – west road from the Illinois border to the Ohio border across northern Indiana. According to a report from the Congressional Budget Office, the “Main Street of the Midwest” had witnessed a 21 percent decline in traffic from 2006 – 2010 due to tolls. In 2014 the operator declared bankruptcy. And in May of 2015 the road became the Indiana Toll Road and by June of 2017, tolls had doubled and hit $10.52 for the entire distance.

Note. Goldman Sachs had brokered the $3.85 billion deal and charged $20 million in fees. Cintra S.A. a Spanish corporation and Macquarie, an Australian corporation now ‘own’ the road with a contract to operate it through 2081.

A closer look at the Trump proposal reveals the plan rewards investors, and yet does not guarantee additional jobs. First, privatization leads to higher costs for commuters and travelers. Plus, private companies have shown their maintenance to be lacking. (Accidents increased on the Indiana Tollway due to poor road conditions.) Tax credits. The Trump plan relies on the states and local governments to provide 80 percent of financing. Thus, the public – private partnership. The use of tax credits provides the potential for huge returns so investors will look at projects with the greatest potential reward. There is no requirement to invest in an unfunded project to acquire the tax credits, potentially slowing or stopping development of new infrastructure proposals. What will stop a savvy investor from simply switching to an already approved project with much less risk than a brand new road, bridge, etc.

For the investors in toll roads, what will entice them to build a new bridge or road in a rural area with light traffic?