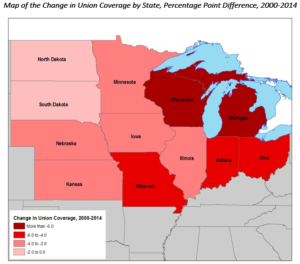 A new report finds that union decline has resulted in economic redistribution from workers to owners.

A new study released today by the Midwest Economic Policy Institute and the Project for Middle Class Renewal at the University of Illinois at Urbana-Champaign illustrates the effect of union decline on state economies across the Midwest.

In The Workplace
sharon
Comments are closed